In recent days, Vietnam’s stock market has been strongly influenced by COVID-19 news. Concerns about the pandemics, plus the second quarter of business reporting season in which many businesses failed to meet targets, the stock market fell into a sell-off.

Ending the session of July 29th, VN-Index fell more than 22.5 points, to close at 790.84 points, lost the threshold of 800 points and the support levels tried to maintain before.

The market breadth was strongly inclined to sellers with 352 decliners while only 59 increased on HOSE. The VN30 stocks were also on a strong decline with 29 stocks falling and only 1 advancing stock. 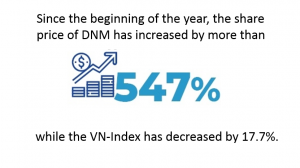 In the context of fiery securities, shares of Danameco Medical Joint Stock Corporation (HNX: DNM) still hit the ceiling despite the market. In the last 3 trading sessions alone, DNM shares has increased by more than 32.85% with 3 consecutive ceiling-hitting sessions.

This can be said, as the pandemic out broke, the demand for medical consumables  gradually increased, especially medical facemask. With that in mind, many investors started to hunt for stocks of facemask manufacturer listed on Vietnam stock market, including Danameco.

Specifically, starting from the Jan 30th session (the first return session after Lunar New Year holiday), DNM shares has rallied to the ceiling for many consecutive sessions. From the beginning of the year until now, DNM’s share price has increased by more than 547%, an extremely impressive increase when the VN-Index fell by more than 170 points, equivalent to more than 17.7%. 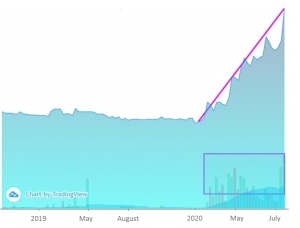 DNM’s share price increased strongly with the improvement in liquidity.

According to statistics, the trading volume of this stock is quite low, the average each session is usually below 2,500 shares / session. However, when COVID-19 started to appear, the stock’s liquidity increased sharply, recording more than 28,000 shares / session averagely in the last quarter.

In terms of business activities, Danameco operates mainly in the field of manufacturing and trading drugs and medical equipment and supplies.

Looking back to the past, DNM’s business results have also experienced many ups and downs. In just 4 years, from 2016-2019, the profit after tax of the company also fluctuated many times. By the end of 2019, Danameco recorded more than 8.68 billion dong of profit after tax, more than 2.2 times the figure of 2018. The company said the result was achieved through market expansion.

However, COVID-19 not only increased the shares value of DNM, but also made a huge breakthrough for company business result, making Danameco among the fastest growing companies in the past 2 quarters. 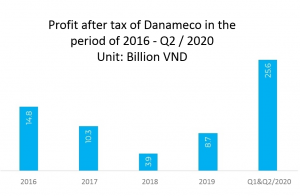 Recently, in the second quarter of 2020, Danameco after-tax profit was reported nearly 17.4 billion dong, increased by 569% compared to Q2/2019. According to company’s explanation on business results, under the context of COVID-19, the company has focused on boosting the production of products for epidemic prevention such as medical masks and protective coveralls. From there, boost revenue to increase sharply year-on-year. In addition, Danameco also invested in production technology, improves production capacity and enhances market expansion and development. These factors have contributed to the strong boom in revenue and profit of the company.

To expand business operations, Danameco has also increased the use of debt. At the end of the Q2/2020, the total liabilities of the company amounted to more than 367.6 billion VND, increased more than 193% from the beginning of the year. In which, mainly short-term debts such as payables to sellers, buyers’ prepayments and accrued expenses … The company’s long-term liabilities also increased sharply in long-term loans and finance lease debts, by more than 12.86 billion at the end of Q2/2020.